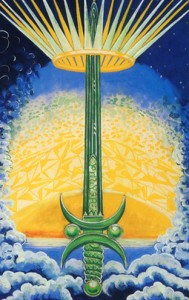 The religion known as Thelema was founded in 1904 by the English poet and mystic Aleister Crowley (1875 – 1947), who is regarded as its prophet. Those who follow the path of Thelema are called Thelemites.

Thelema emphasizes individualism, and the uniqueness of each person’s Will. As a result, it is very difficult to make blanket statements about its nature or (still more so) the natures of its adherents. Even the label “religion” fits Thelema awkwardly in some contexts — it is in other senses a philosophy and a way of life, while also overlapping with the set of practices and symbols commonly called “Magick”.

In this section of the U.S. Grand Lodge O.T.O. site we offer what can only be a bare introduction to Thelema, covering Thelema’s founder Aleister Crowley, Thelemic theology, our calendar and customs, and a brief description of the O.T.O.’s sister Order, the A∴A∴. We strongly encourage you to use these resources as a gateway to your own explorations. “There is joy in the setting out; there is joy in the journey; there is joy in the goal.”

Permanent link to this article: https://oto-usa.org/thelema/