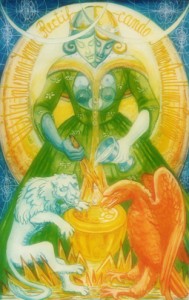 Nearly all Thelemites keep a record of their personal practices, and their progress therein, in a “Magical Diary”. Most Thelemites also practice a particular form of prayer four times per day, which is specified in a work called Liber Resh vel Helios. This work is included in Book 4, which is available through our online bookstore.

Thelemites often take mystic names or “magical mottoes” for themselves as a sign of commitment; and customarily greet each other with the phrase, “Do what thou wilt shall be the whole of the Law”; to which the customary response is, “Love is the law, love under will”. Sometimes these phrases are abbreviated by the simple statement of the number “ninety-three”, which number signifies both “Will” and “Love” through a particular form of numerology of significance within Thelema.

Most Thelemites perform magical rituals of various types, often as a way of focusing the Will on a given outcome or state of consciousness which is deemed necessary to their work. Some Thelemites perform only solo rituals, but many also participate in group rituals, private or public. Group rituals commonly performed include the initiations and Gnostic Mass of the OTO and Crowley’s Rites of Eleusis

Although every Thelemite must interpret Liber AL for themselves, most Thelemites consider (in accord with Crowley’s interpretation) that every person has a divine True Will, and that if everyone knew and did their Will, there would be harmony. However, since we are all in the process of discovering our own True Wills, there is sometimes conflict. For many Thelemites, a practical ethic of non-interference results: To interfere with another’s Will and freedom is therefore most likely to be in discord with one’s own True Will.

As a result, most Thelemites and Thelemic communities share this ethic of harmony and non-interference, avoiding the presumption that anyone can know another’s True Will better than that person can know it himself. This promotes an environment of mutual respect and trust, and encourages each individual to discover their own path of True Will rather than relying on the direction of others.

Permanent link to this article: https://oto-usa.org/thelema/customs/