If you are looking for the calendar of U.S. Grand Lodge events, it is here. 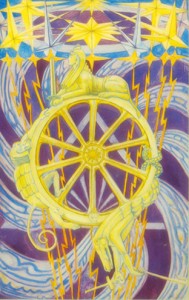 The Thelemic calendar counts years from 1904 EV (the year Liber AL was received). Each Thelemic year starts at the instant of the northern-hemisphere Vernal Equinox, coinciding with the Thelemic holiday called the Feast for the Equinox of the Gods. The civil date of the Thelemic new year will thus vary from year to year, and from location to location depending on the local time zone; but it is always within a few days of March 20.

Rather than simply giving the year count from 1904, the Thelemic calendar uses a two-tiered system. The “upper” level gives a count of twenty-two year periods, or “docosades”, since 1904. The “lower” level gives the years since the start of the current docosade. Both are zero-based, with nonzero numbers being represented as upper and lower case Roman numerals, respectively. So, for example, the civil year 1996 is (after March 20) Thelemic year IViv, because 1904 + (4 x 22) + 4 equals 1996. A table correlating a range of Thelemic and Gregorian years is available here.

Within each year, dates and times are given by the positions of the Sun and Moon in the tropical zodiac. For example, February 1 2013 EV at 6pm PST would be expressed as “Sol in 13° Aquarii : Luna in 24° Librae : Anno ⅠⅤⅹⅹ”. This information specifies the date and time to within about two hours. There is considerable freedom in how dates and times are formatted; one may use English or Latin, astrological names or symbols, and verbose or concise phrasing. See the bottom of this page for an example of concise symbolic representation.

Optionally, the day of the week (as measured relative to local midnight) can be specified. Latin names are used which correspond to the characteristic planets of the days, as follows:

Alternatively, the Latin name of the planet may be replaced by the appropriate planetary symbol.

When giving dates in the civil calendar, Thelemites will often append “e.v.” This is an abbreviation of the Latin phrase “era vulgaris,” or “common era.”

The official holy days of Thelema are set forth in The Book of the Law, Ch. II, v. 36-41. The specific dates attributed to them are given in Crowley’s commentaries, and are summarized below:

Various anniversaries commemorating major events and figures in the history of Thelema and O.T.O. are also celebrated informally by some Thelemic groups.

The article “The Thelemic Calendar” in Agape 10.1 discusses the Thelemic calendar in more detail.

Presenting Thelemic dates and times involves astronomical calculations to establish the solar and lunar positions. Brother Clay Fouts provides a service called Era Legis which makes this easy for website creators. The current time, as reported by Era Legis, is shown below. The weekday is calculated for the US Pacific timezone.

Permanent link to this article: https://oto-usa.org/thelema/calendar/