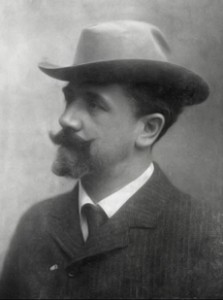 Carl Kellner was an Austrian paper chemist and an avid student of Freemasonry, Rosicrucianism and Eastern mysticism, and traveled extensively in Europe, America and Asia Minor.

During his travels, he claims to have come into contact with three Adepts (a Sufi, Soliman ben Aifa, and two Hindu Tantrics, Bhima Sena Pratapa of Lahore and Sri Mahatma Agamya Paramahamsa), and an organization called the Hermetic Brotherhood of Light.

During the course of his studies, Kellner believed that he had discovered a “Key” which offered a clear explanation of all the complex symbolism of Freemasonry, and, Kellner believed, opened the mysteries of Nature. Kellner developed a desire to form an Academia Masonica which would enable all Freemasons to become familiar with all existing Masonic degrees and systems.

In 1885, Kellner met the Theosophical and Rosicrucian scholar, Dr. Franz Hartmann. He and Hartmann later collaborated on the development of the “ligno-sulphite” inhalation therapy for tuberculosis, which formed the basis of treatment at Hartmann’s Salzburg sanitarium.

In 1895, Kellner began to discuss his idea for founding an Academia Masonica with his associate Theodor Reuss. During these discussions, Kellner decided that the Academia Masonica should be called the “Oriental Templar Order.” The occult inner circle of this Order would be organized parallel to the highest degrees of the Memphis and Mizraim Rites of Masonry, and would teach the esoteric Rosicrucian doctrines of the Hermetic Brotherhood of Light, and Kellner’s “Key” to Masonic symbolism. Both men and women would be admitted at all levels to this Order.

Kellner died of blood poisoning in Vienna on June 7, 1905.

Permanent link to this article: https://oto-usa.org/usgl/lion-eagle/carl-kellner/